It is the highest commune of the whole Appennino, since it is situated at a height of 1,434 metres above sea-level.

Rocca di Cambio is a small mountain town in the district of L’Aquila, in the heart of Abruzzi. It lies in the northern part of the Altopiano Velino-Sirente, today otherwise known as Altopiano delle Rocche, as well as the small towns of Rocca di Mezzo, Rovere, Ovindoli and Terranera. This is an area worth knowing for its usages, customs, traditions, the unmistakable taste of its cuisine and for the story of its people whose lives have been characterized by hard work, poverty and sacrifices for a long time. 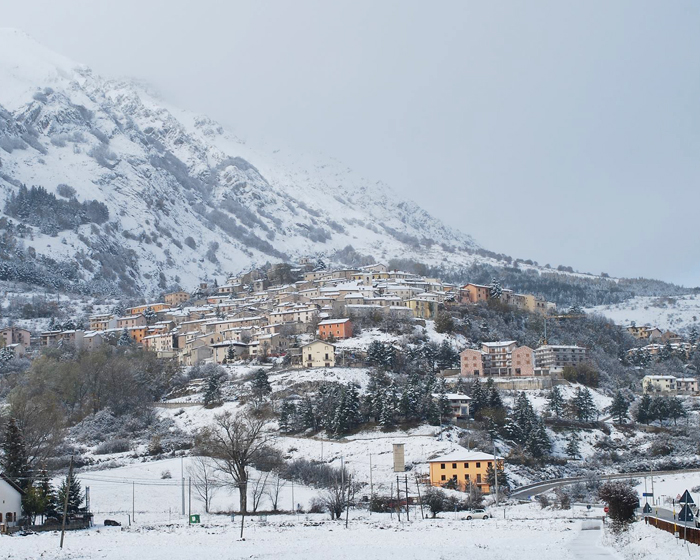 The inhabitants of Rocca di Cambio lived on a poor farming and on small sheep and cattle breeding until 50 years ago. In fact only at the beginning of the fifties, the first signs of a positive change were noticed in the local economy thanks to Mr. Aldo Jacovitti. He has been leading the commune as its mayor with skill and enthusiasm since 1951 and for three authorities, and mainly devoting to the revaluation of the historic centre, the road system, the hotel industry and the tourist development.
His greatest commitment was the creation of the skiing resort of Campo Felice which, as a consequence, led to that stimulus determining a particular trend inversion in the local economy. In 1965, 1966 and 1968 Rocca di Cambio became famous and important because it was one of the laps of the Italian cycle race named “Giro d’Italia”. They were and still remain three unforgettable occasions in the history of this small town that its mayor, Mr. Jacovitti, wished to offer his citizens.

People of the sport world as well as to that of journalism and of television were all there, in that small mountain town. Among them, there were Mr. Torriani, Mr. Zavoli, Mr. De Zan, Mr. Merckx, Mr. Anquetil, Mr. Gimondi, Mr. Adorni, Mr. Raschi, Mr. Altig, Mr. Motta and Mr. Taccone. They all praised Rocca di Cambio. Moreover, on the occasion of the lap of “Giro d’Italia” in 1965, a parallel show was organized between that small town and that one of Saas Fee, a Swiss small mountain town situated at a height of 1,802 metres above sea-level which was one of the laps of “Giro d’Italia” in that same year as well. The ceremony of making Rocca di Cambio and Saas Fee twin cities was arranged for that occasion by the two organizers of such a pleasant initiative who were the two mayors of those two small towns in that year as well: the formerly mentioned Mr. Aldo Jacovitti and Mr. Hubert Baumann.

Among so many important people of the culture world as well as of sport and of politics who stayed at Rocca di Cambio, we cannot help remembering the Abruzzese writer Ignazio Silone (who wrote the last chapter of his famous novel, “Uscita di Sicurezza”, just here).
Nowadays Rocca di Casmbio has 478 inhabitants and has made a name for itself as a tourist and a winter sport resort which many people also prefer as their summer holiday destination. 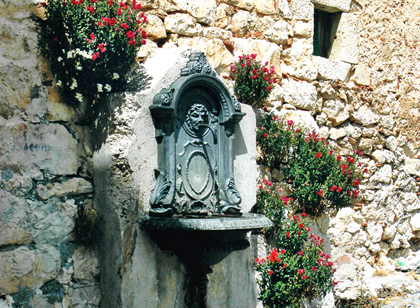 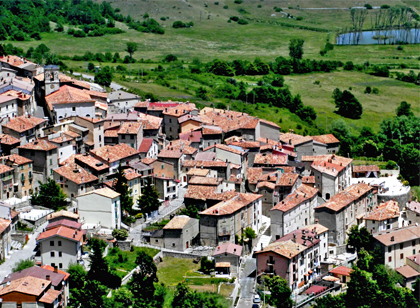 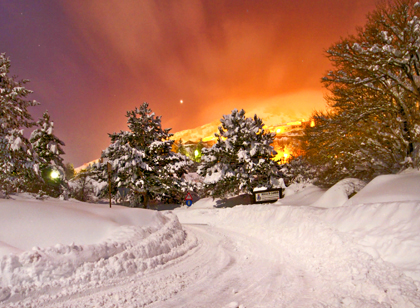 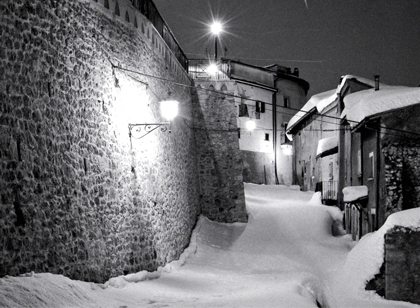 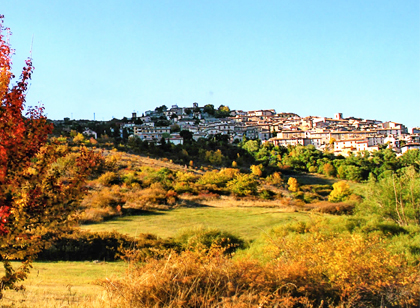 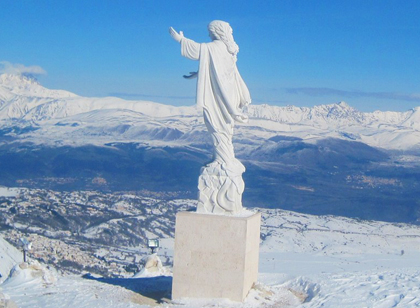 A historical account about Rocca di Cambio and its first centre is scarce.

According to some sources, there can be no doubt both that the village was located where Santa Lucia Abbey is now and that its first inhabitants were almost certainly the shepherds who found excellent pastures and good waters for their flocks in that area. Another account makes its origins dated back to the period between 6th and 9th century, that is when the Longobard invaded the valley of L’Aquila.
According to other sources, the first centre was developed in 591 A.D., when Ariulfo, Duke of Spoleto, besieged Forcona (today known as Bagno) to enlarge his dominions on the whole Valerian province. The inhabitants of Forcona found a refuge on the neighbouring mountains to escape from slaughters and they were soon also joined by the inhabitants of Aveia who were trying to avoid a similar destiny. About 1000 A.D., the small town was known as Rocca Ottonesca, it being built by Otho the Second of Bavaria as his summer stay. Since 1254, the foundation year of L’Aquila, the small urban settlement – which in the meantime changed its name firstly in Rocca di Cagno and then secondly and definitively in Rocca di Cambio – has been had the same rights and duties of the surrounding castles. In 1268, it became a dominion of Carlo d’Angiò – the son of Louis the Eighth – and in September 1294, upon request of the Pope Celestino the Fifth, it was part of the countryside of L’Aquila.
In 16th century, there was firstly a period of Spanish rule with the Baron of Medina and then the castle was ceded to Baron Antonelli of L’Aquila. This place was also the theatre of a violent insurrection against the French, thus consolidating the long Bourbon rule which ended after the revolts of the Risorgimento. 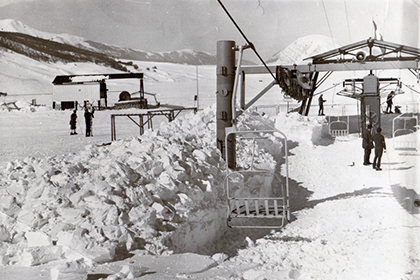 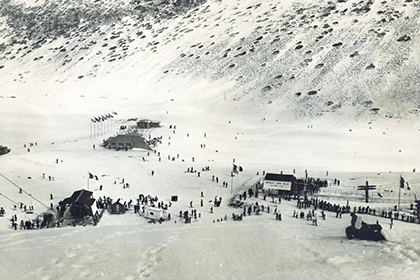 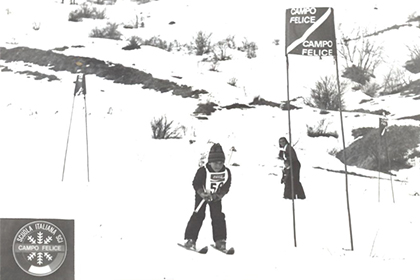 The origin of the name

Also the account about the origin of the name is uncertain and fragmentary, and that we are reporting here is nothing but suppositions elaborated by renowned historians.

According to Febonio, Rocca di Cambio should be the former Oppidum Frustena. Such a suggestion would emerge from the Peutingerian table, so called from the German historian Conrad Peutinger who about 1500 A.D. discovered in Spira (in Germany) a tablet written at Constantinople in the days of the Emperor Theodosius. This tablet, also showing the least important roads of the Roman Empire, reproduced the route of a side street of the Valerian way. One of its branch lines passed near Amiternum (today known as san Vittorino) and led to Aveia (today known as Fossa), and then – crossing Oppidum Frustena – arrived at Alba Fucens (today known as Massa d’Alba), the city of the Marsi. In an itinerary mapped by the Roman Emperor Antonino Pio, Oppidum Frustena is halfway between Amiternum (that is San Vittorino) and Alba Fucens, about 18 miles far from the latter. According to some eminent historians, this area should correspond to the place where now Santa Lucia Abbey stands. So the name of Rocca de Cagno for some people and of Rocca de Cagnio for some others may derive from both Oppidum (a Latin word meaning Fortress or Castle) and Mount Cagno dominating the small town. With the passing of time, and quite recently anyway, the name should have changed in Rocca di Cagno firstly and then secondly in Rocca di Cambio. On the other hand, according to another supposition, the word Cambio should mean a real exchange made by a squire of the Subequanan Valley of the Castle of Secinaro (which was closer to his properties) for the Fortress of the Altopiano. Many other people have the change from Cagno into Cambio dated back to the circumstance of an exchange horse station in that village as it could be found in any other place situated along the most important roads. Anyway the first supposition still remains the most reliable. The history of Rocca di Cambio is interwoven with a series of facts and events whose most interesting implications are faithfully reported in the book “Rocca di Cambio e Campo Felice” by Pio Di Stefano. We wish to express all our heartfelt thanks to him for putting his precious work at our disposal while writing the above report.